I've wanted to write this chapter and add it to the LEGENDARY SURFERS collection for a very long time.

Over the decades since his death, there's been a good deal of folklore added to Nick's history as a surfer. Wanting to get the story straight, myself, I've done my own research and this is the result. I hope Nick's story inspires you as it has many others.

Nicolás Rolando Gabaldón (February 23, 1927 – June 6, 1951) was California's first documented surfer of African-American and Latino descent -- at a time when many beaches were segregated and opportunities for minorities more limited.

Nick was born February 23, 1927 in Los Angeles, California. His mother was Black and his father was Latino. Very little is known of his childhood. He lived most of his life in Santa Monica and was one of 50 black students at Santa Monica High School at the beginning of the 1940s.1

Nick taught himself how to bodysurf at a 200 foot roped off stretch of demarcated beach informally referred to as "Ink Well Beach," "Negro Beach," and other more derogatory names. In 1924, after the forced closure of black owned and operated Bruce's Beach, and due to de facto segregation, that portion of beach front near Bay Street and Ocean Boulevard became the only place in Southern California that racial minorities were freely allowed without harassment or violence. The area remains popular with African American Angelenos up to present day.2

Inkwell Beach offered blacks a place to enjoy the sun and sand and to pursue water and beach sports. There were purportedly a number of “Negro boys” who regularly played volleyball, swam and body surfed. Infamous names in Santa Monica history such as Carter, Chychester and Mouton are sometimes mentioned as some of the pioneer Black Santa Monica Surfers of the 1930s. It is doubtful, however, that any of these actually surfed on boards. What is known is that during the summer months, Inkwell was crowded with black children, teenagers and families from Santa Monica, Venice, Los Angeles and its surrounding areas -- Nick Gabaldon being one of them.3

Nick was a tall, handsome and athletic black man of cool and casual demeanor. His athleticism and his love for the ocean got him quickly befriended by lifeguards like Buzzy Trent, Peter Cole and Ricky Grigg.4 Lifeguard legend Preston "Pete" Peterson is said to have been one of the biggest influences on Nick. He even loaned Nick his lifesaving surfboard to ride.5 It was a 13’ hollow rescue board that could also be used for stand-up surfing.6

Nick learned how to stand-up surf and surfed whenever he got the chance. In the early 1940’s, the City of Santa Monica had a good sized black community. Census shows some 2,000 blacks living within the city limits. There, within a few blocks of his home, was a thriving black community complete with black churches and businesses. Nick was one of the 50 or so black students attending Santa Monica High. Although he wasn’t alone, it appeared that he was the only Negro that really took to the new sport of wave riding on surfboards. He lived there on 19th Street with his father and mother, Nicolas and Cecelia and his sister and her two children.7

After graduating from high school in 1945, Nick joined the Naval Reserve toward the end of World War II, serving from 1945 to 1946.8 While stationed on the Great Lakes, Nick became a championship boxer.9 Returning home, he enrolled in Santa Monica College, surfed and lifeguarded.10

“I grew up surfing on the Beaches of Santa Monica in the 1945 thru 1955 era,” famed Malibu surfer Les Williams wrote me, “with Pete [Peterson] and TZ [Tommy Zahn] as friends. Often surfed in front of Ricky's house then [Ricky Grigg], his mother then was known as Mrs. Campbell. Nick came to join us in the water in the late 40's, but learned his surfing at the (now removed) Crystal Pier. I know of no reference to the 'inkwell', and knew many of the SM lifeguards then, and never heard such a derogatory term.”11

By this time, the focal point of Southern California surfing had shifted from San Onofre to Malibu Beach. For a long time, actually, both served as a bi-polar axis for California surfers. The innovations were being made at Malibu, though, and the waves coming off cobble stoned Malibu Point were and continue to be some of the finest -- some would say thee finest -- waves along the West Coast of the United States. Without question, the surfers there would go on to become legends in the sport -- as did Nick.

Shifting to the better and more challenging waves of Malibu around 1949, Nick was impeded somewhat because he lived twelve miles south and didn’t own a car. At first he tried hitch hiking, but a big black man hitch hiking on the Coast Highway just didn’t cut it, so he decided to paddle to Malibu. Standout Malibu surfer Matt Kivlin remembered talking with Nick on the day that he first paddled his surfboard the 12 miles north. Matt laughed as he testified “and he paddled back home that night.”12 According to Matt Warshaw, Nick paddled the 12 miles to Malibu and back by way of Santa Monica Bay for several weeks.13

In time, Nick was accepted almost without question by the crew at Malibu. He was a handsome, well liked guy with surfing ability and stoke. Malibu regular, Bill Shea remembers Nick as a respectful, unassuming man: “At first he would kind of keep his distance and allow us some space. He was the new kid on the block so he would just surf and then sit alone on the beach when he got out of the water and just watch the other surfers. I think he was studying their surfing styles. He was really interested in getting good as a surfer.”14

Nick didn’t have to sit alone for too long, as the locals accepted him as their own. His friends and surf contemporaries included Greg Noll, Mickey Munoz, Ricky Grigg, Matt Kivlin, Buzzy Trent, Bob Simmons and Les Williams.15

"First time I saw Nick,” Les Williams, one of Nick’s best friends recalled, “he was surfing at what was known then as the Crystal Plunge. He was tall and handsome. He looked like he was Tahitian or Polynesian. He was a gentleman. He was accepted and respected by all of us. We didn't look at color, he was just a friend."16

"Race wasn't really an issue at Malibu," agreed Ricky Grigg, a teenager back then. "Nick was perhaps considered more like a Hawaiian than anything else. Everyone liked him. And he was a pretty smooth surfer, too."17

“Nick was totally accepted by us as a surfer, and a person,” Les continued, writing me in 2005. “Understand that Nick was one of my self-described 'troika'. Surfing has never been race or color sensitive, but it sure is receptive of ability. Nick was a little slow on his feet, as a surfer, but as an accomplished (former) Navy Boxer he was powerful, and fast. As a surfer I would rate him at B+.”18

Nick also made an impact at Malibu, too. Later to become a surfing great himself, Mickey Munoz forever appreciated Nick taking him out tandem: "Nick took me tandem a few times when I first started surfing. It was an accelerated experience only an expert could guide you to. I think it helped plant the seed of stoke that has lasted all my surfing life."19 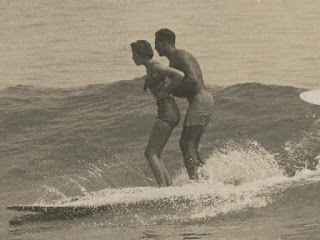 On June 5, 1951 (some reports cite June 6), a very strong south swell slammed into the California coast at Malibu Beach. From point to pier the waves rattled in, cresting at a solid eight to ten feet.20 On that fateful afternoon, Nick was one of the few who rode Malibu at that size, this time on a new Bob Simmons balsa wood surfboard.21 Although there are a number of different versions as to what happened next, the most plausible one is that recalled by Bob Hogan, who was riding in back of him. On the wave that would take his life, Nick was on the inside and Hogan was in the rear. As Nick got closer to the pier, Bob called out for him to pull out. Nick tried but couldn’t. His Simmons board was seen striking the pier.22

Whether Nick attempted to “shoot the pier” or just couldn’t pull out once the current had him close and locked in will never be known. His board was found immediately, but it would be 3 to 4 days before his body was found washed up on Las Flores Beach, east of the Pier.23

Big Wave Legend Ricky Grigg later wrote: “he was a great athlete and always a gentleman. Everyone liked him a lot. He was totally accepted in the surf community at Malibu. In fact, he was sort of an icon being the only Black surfer. I would say he was a great ambassador for his race and minorities in general. I considered Nick one of my dearest friends. His death came as a great shock and loss to me personally."24

Six days prior to his death at age 24, on May 31, 1951, Nick wrote a somewhat prophetic poem for submission to the Santa Monica College literary magazine. It is entitled "Lost Lives" and was published in its entirety in the now defunct newspaper Santa Monica Evening Outlook.25

The capricious ocean so very strong,
Robust, powerful, can I be wrong?
Pounding, beating upon its cousin shore,
Comes it clapping, rapping with a mighty roar.

The sea vindictive, with waves so high,
For me to battle and still they die.
Many has it taken to it’s bowels below,
Without regards it thus does bestow,
Its laurels to unwary men.

With riches taken from ships gone by,
Its wet song reaches to the sky,
To claim its fallen man made birds,
And plunge them into depths below,
With a nauseous surge.

Scores and scores have fallen prey,
To the salt of animosity,
And many more will victims be,
Of the capricious, vindictive sea. 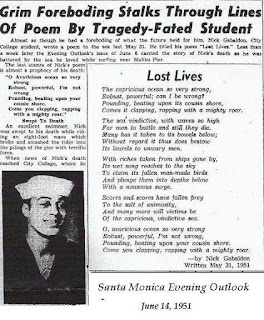 There is a brief reference to Nick's death in the 1957 novel Gidget by Frederick Kohner. Nick is not mentioned by name, but in the story, the protagonist, Franzie, refers to her parents being opposed to her surfing because of what happened to that "colored boy" who crashed into the pier.27

On February 7, 2008, a City of Santa Monica plaque was dedicated to honor Nick Gabaldon’s contribution to surfing and to recognize the stretch of Santa Monica State Beach once called “the Ink Well.”28


Lastly, Nike produced and funded a documentary on Nick, as part of a Black History Month celebration. Subsequently, there is an Annual Nick Gabaldon Day in Santa Monica, inspired by the film, held every year where the film is shown and inner city kids taught how to surf. The film itself won best sports film of the year in 2014, from the Webby Awards -- a competition which the New York Times called “the internet’s highest honor.”1
1  Yelland, Richard. Email to Malcolm, 8 August 2018; founder, director of Curtis Birch, www.curtisbirch.com.

Posted by Malcolm Gault-Williams at 10:00 PM 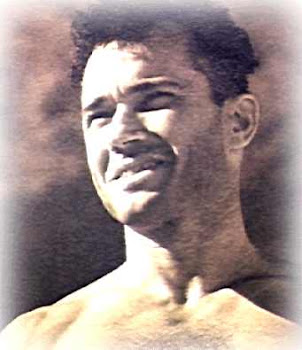 E.J. Oshier: Between The Cove and Nofre

Aloha and welcome to the LEGENDARY SURFERS chapter on E.J. Oshier, who began surfing in the mid-1930’s as a member of the Palos Verdes S... 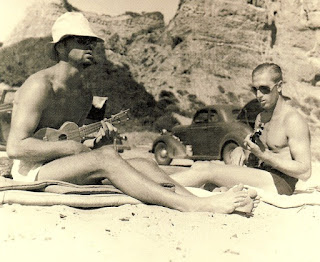