Aloha and welcome to this chapter segment in the LEGENDARY SURFERS series on Austronesians.

Each generation tends to call surfing its own. Yet, riding ocean waves on a platform of some sort has been a sport for thousands of years. Each generation gets thrilled by the act that defies our attempts to try to describe it. Although many attempts have been made and a number are worthy, the expression coined in the late Twentieth Century perhaps says it best: “Only A Surfer Knows the Feeling.” As surfers, we call that feeling “stoke.” The expression most likely came when the feeling was compared to getting a fire burning. You stoke the flame. Well, the waves stoke us surfers.

As I’ve previously opinionated in Surfing's Origins, my feeling is that surfing is actually far older than any of us imagine and it's been practiced all over the world.

Although surfing at some of these locations are documented (reed surfing in Peru 3,000 years ago and tidal bore surfing in the 10th century China) and appear to be earlier than Polynesian surfing, it is to riding on wooden boards on ocean waves by Austronesians in Polynesia that we as surfers trace our origins back to. Certainly, this is the surfing culture we most identify with.

Polynesia is a sub-region of Oceania, the vast mostly aquatic expanse that Austronesian peoples migrated into and through, on various sizes of outrigger canoes. Polynesia is made up of more than 1,000 islands scattered over the central and southern Pacific Ocean. The indigenous people who inhabit the islands of Polynesia are called Polynesians. They have many things in common, including language relatedness, cultural practices, and traditional beliefs. In centuries past, they had a strong shared tradition of sailing and using stars to navigate at night. Polynesia is one of three major cultural areas in the Pacific Ocean; Melanesia and Micronesia being the other two.

The Polynesian people are considered – by linguistic, archaeological, and human genetic evidence – a subset of the sea-migrating Austronesian people. Tracing Polynesian languages places their prehistoric origins in Island Melanesia, Maritime Southeast Asia, and ultimately, in Taiwan.

Between about 3,000 and 1,000 BCE, speakers of Austronesian languages began spreading from Taiwan into Maritime Southeast Asia.

There are three theories regarding the spread of humans across the Pacific to Polynesia. These are outlined well by Kayser et al. (2000) and are as follows:

Express Train model: A recent (c. 3,000–1,000 BCE) expansion out of Taiwan, via the Philippines and eastern Indonesia and from the northwest ("Bird's Head") of New Guinea, on to Island Melanesia by roughly 1400 BCE, reaching the western Polynesian islands around 900 BCE, followed by a roughly 1,000 year "pause" before continued settlement in central and eastern Polynesia. This theory is supported by the majority of current genetic, linguistic, and archaeological data.

Entangled Bank model: Emphasizes the long history of Austronesian speakers' cultural and genetic interactions with indigenous Island Southeast Asians and Melanesians along the way to becoming the first Polynesians.

Slow Boat model: Similar to the express-train model but with a longer hiatus in Melanesia along with admixture — genetically, culturally and linguistically — with the local population. This is supported by the Y-chromosome data of Kayser et al. (2000), which shows that all three haplotypes of Polynesian Y chromosomes can be traced back to Melanesia.

In the archaeological record, there are well-defined traces of this expansion which allow the path it took to be followed and dated with some certainty. It is thought that by roughly 1,400 BCE, "Lapita Peoples", so-named after their pottery tradition, appeared in the Bismarck Archipelago of northwest Melanesia. This culture is seen as having adapted and evolved through time and space since its emergence "Out of Taiwan". They had given up rice production, for instance, which required paddy field agriculture unsuitable for small islands. However, they still cultivated other ancestral Austronesian staple cultigens like Dioscorea yams and taro, as well as adopting new ones like breadfruit and sweet potato.

Within a mere three or four centuries, between 1,300 and 900 BCE, the Lapita archaeological culture spread 6,000 km further to the east from the Bismarck Archipelago, until reaching as far as Fiji, Tonga, and Samoa.

In the chronology of the exploration and first populating of Polynesia, there is a gap commonly referred to as the long pause between the first populating of Western Polynesia including Fiji, Tonga, and Samoa among others and the settlement of the rest of the region. In general this gap is considered to have lasted roughly 1,000 years. The cause of this gap in voyaging is contentious among archaeologists with a number of competing theories presented including climate shifts, the need for the development of new voyaging techniques, and cultural shifts.

After the long pause, dispersion of populations into central and eastern Polynesia began. Although the exact timing of when each island group was settled is debated, it is widely accepted that the island groups in the geographic center of the region (i.e. the Cook Islands, Society Islands, Marquesas Islands, etc.) were settled initially between 1,000 and 1,150 CE, and ending with more far flung island groups such as Hawaii, New Zealand, and Easter Island settled between 1,200 and 1,300 CE. 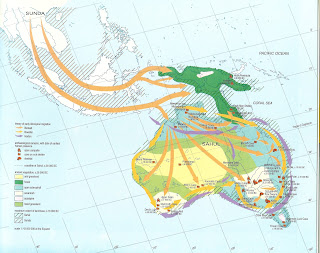 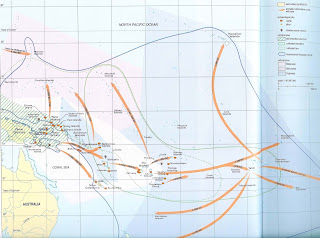 Posted by Malcolm Gault-Williams at 2:51 AM 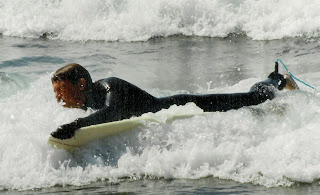