Children of the Tide

Writings and artworks describing and depicting wave riding in 10th Century Hangzhou, China, came to light in the first decades of the 21st Century. The discovery was made by Nicola "Nik" Zanella, surfer and student of Chinese literature and language, who went on to write Children of the Tide, about a kind of wave-riding culture that existed at the Qiantang River Bore in Hangzhou, during the Song Dynasty (960 AD to 1279 AD).

In 2006, Zanella was visiting a Buddhist temple in Kunming, the capital and largest city of China’s Yunnan province. There, he saw a bas-relief (a form of sculpting that has less depth to the faces and figures than they actually have, when measured proportionatey to scale. An ideal form of sculpture best suited for walls) that showed a group of Arhats (Buddhists who have achieved Nirvana), doing something that looked similar to surfing. One of the Arhats in particular appeared to be doing something exactly like surfing. “The guy was standing up, his pose was exactly what we teach – back foot flat, front foot at a 45-degree angle, looking five meters in front of the board,” he told the South China Morning Post. “And his face – he looked stoked.” The surfer in question was, however, riding a fish.

Zanella asked someone at the temple about the sculpture. He was told that the people in the sculpture were from Hangzhou, which is the place where the Red Bull sponsored "Battle of the Silver Dragon" event is held, on one of the world’s largest tidal bores in the Qiantang River.

As Zanella researched, he found a story called "Contemplating the Tide," written by a poet named Zhou Mi. In the story, Zhou wrote about a festival where spectators watched as “hundreds of brave watermen … with unfastened hair and tattoos, holding colored flags, race to the water … they paddle towards the oncoming waves … then they leap up and perform a hundred maneuvers without getting the tail of their flags even slightly wet.”

The poet went on to describe the actions of the competitors in greater detail: “They gather in a group of a hundred, holding colored flags, and compete in treading waves,” he wrote. “They head straight to the river mouth to welcome the tide. Moreover, there are some who tread on drifting wood … performing hundreds of water tricks, having fun, each displaying great mastery.”

These wave riders rode the Qiantang River Bore as part of the annual autumn festival, to help appease the God of the Tide (aka the Dragon King) – and for the entertainment of the Emperor.

How did Nik Zanella's discovery develop?

"It’s a long love affair," he admitted. "I took Chinese language and literature in university in 1988, and have been surfing since the mid-80's. I spent the last decade working at surf development projects in China, lately coaching part of the National Surfing Team.

"So my two passions, China and surfing, always went hand-in-hand. I started working on the book in 2014, but the research took off 10-years before that. Traveling to China, I kept bumping into traces of wave-riding and wave-watching in Chinese art and literature.

"In 2006 I found the Surfing Buddhas of Kunming inside a monastery, while trekking in Yunnan province. The temple’s wall showed this clay bas-relief of about 30 surfers, dated 1880."

Writer Jason Lock asked Zanella, a bit increduously, "Who were [the surfers] and why were they doing this? [And] How could the sculptor, born at the beginning of the 19th Century [hundreds of years later]... so realistically depict surfing if he had not seen surfing?"

"I spoke with the temple’s Abbott and received the key-words that got me going," Zanella replied. "The key words were 弄潮儿 (Children of the Tide) and most of my research has been about looking for them through 5,000-years of documented history and literature."

The Children of the Tide apparently rode the river bore at Hangzhou. A tidal bore forms when the water from a river reverses and the tide pushes water up the river. The Qiantang River at Hangzhou has the world's largest tidal river bore which can be over 4 meters high, 3 kilometers wide and travel with a speed in excess of 24 km/hr. (15 mph). At certain locations, reflected waves can reach 10 meters in height. Its roar can be heard over an hour before its arrival. It is strongest in the fall season, but also occurs at other times of the year.

Not only was Hangzhou special because of the bore, but the time of the Song Dynasty was a special time, too. "We know a lot about the Song," Zanella said. "It was a vibrant open-minded society in all aspects. Hangzhou was one of the richest towns on the planet, hosting over one million inhabitants, at the forefront of art, medicine and technology. Sports like climbing, polo, boat-racing, swimming and even a local version of soccer were all practised. Wave riding could fit right in this cultural mood."

Was the wave riding a religious activity?

"It was religion and free surfing as well,." answered Zanella. "At that stage, wave riding was most likely the prerogative of the Wu people, boatmen living in southern China since prehistoric times. There’s several legends revolving about the wave and the people taming it.

"Several sources compare them to Buddhist monks. The act of ‘treading waves' (踏浪 talang in Chinese) was mainly associated with the God of the Tide (also known as the Dragon King). By offering their bodies to the tidal wave, the Children of the Tide could placate the God's raging soul and prevent calamities.

"Note that the God of Tide is still venerated in the Qiantang Delta area. This ritual was performed during the Mid Autumn Festival, when the wave is at its biggest and the emperor would commission a sumptuous military parade that culminated with the Children of the Tide performing on the tidal bore. But there clearly was a recreational aspect to this, and the practice was continued, beyond the official rite, for the pure joy of riding waves.

"The activity did take off and lasted quite a while actually." Unfortunately, "it was banned many times, but local fishermen kept riding the wave in secret. The activity [eventually] faded because of environmental and social problems.

"First of all, risking your life for fun was not considered morally acceptable by the regency, who used the expertise of the Children of the Tide to perform rites, but couldn’t stand the recreational, dangerous side of the activity and policed free-surfing almost to extinction.

"The other reason of it fading was the river became increasingly fortified. Most mud banks disappeared and access became dangerous."

What were the Children of the Tide riding?

"Bodysurfing, riding on pieces of wood, canoes and even sailboats," answered Zanella. "One poem in particular speaks about the “fish of the god of the tide”, and that’s why the surfing Buddhas are depicted riding carps, a sacred fish. Fishermen from the area confirm that small rowing boats and planks of wood were used until the recent past.

"Living in China, I had access to teachers and experts. My wife Yang Li has an MA in Chinese History, we both love Hangzhou and that dynasty. I slowly collected relevant pieces of literature, translated them, double check with competent people, then did philologic work on the key words.

"That is what the core chapters [of my book] revolve around and that took the longest time. But the book is not an essay. All the research is woven into a narration that starts in dynastic times and reaches the present. It’s the story of the Children of the Tide and how their story somehow influenced modern Chinese surfing.

"The Polynesians were most likely standing up on boards before the Children of the Tide. And the Peruvians with the Caballitos de Totora pre-date both. So asking ‘who did what first’ is not the right way to put it. What’s important here is that the Chinese were the first to write about it." 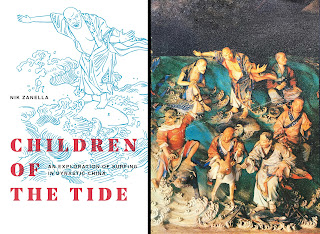 Haro, Alexander. “Researcher Finds Evidence That Surfing May Have Originated in China Nearly 1,000 Years Ago,” The Inertia, 3 March 2021. https://www.theinertia.com/surf/surfing-may-have-started-in-china-1000-years-ago-bas-relief-sculpture-from-buddhist-temple/

Posted by Malcolm Gault-Williams at 8:59 PM 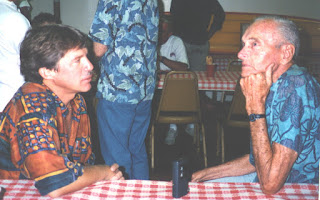